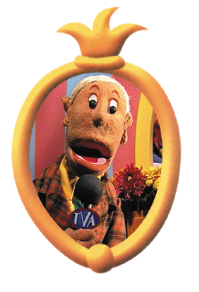 Ted Turnover is the TV Alphabeticus Network anchor man, shipped all the way from GNN (Global News network). After having a less than fashionable leap into current affairs journalism where he continually told the real story, Ted was demoted to reading the weather for out of the way places like the Antarctic and the Arctic. After being frozen in journalistic exile, Ted was head-hunted by TV Alphabeticus because of his unusual hair, strange clothing but most importantly, for his honest approach to the news.