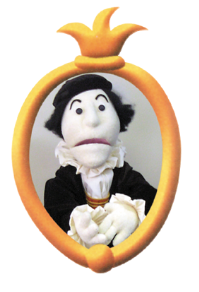 When Mario Vowelmouth was a small boy in Sicily, he was the only one in his family who learnt to speak English – albeit from an Italian pizza maker who had studied nursery rhymes. When Mario’s family moved to New York to establish a pizza business, he was seconded by some tough immigrants to teach English. He took a doctorate in teaching English as a second language at the Bronx Pizza University and straight after was head hunted for a learned position in Alphabeticus where he now teaches English at Nosmo King’s Book Cafe. The doctor also has a penchant for country and western opera.