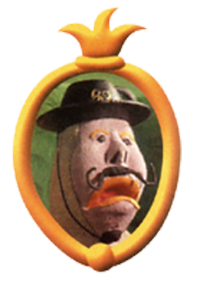 HE WHO WOULD BE KING! POLLY’S WICKED UNCLE!

The Earl of Greynessness is a crusty, English snob and Princess Polly’s wicked uncle. An evil cup and saucerer, he brews up trouble and causes a stir wherever he goes. He steals the letters of the alphabet because he is threatened by their power and wants to destroy them. His goal is to become the King of Alphabeticus even though he cannot read or write. A stained character, he commands an army of Cold Prickleys (led by Capitain Von Prickle) to carry out his every whim, which includes making him copious cups of tea. He is also known as Sir Teabag.