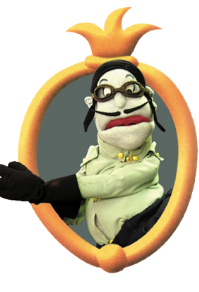 HE WHO WOULD BE LED ASTRAY!

Prior to teaming up with the Earl of Greynessness, Ulrich Von Prickle lived a quiet life in the German hinterland training fruit flies for a travelling fruit fly circus run by his Uncle Helmut. When Helmut lost Ulrich’s favourite fly called Brian, Ulrich was heartbroken. His world shattered, Ulrich went through a strange phase and took to wearing a leather-flying cap and swimming goggles and hated all those who were happy. Enter the Earl of Greynessness who, preying upon Ulrich’s vulnerability, knighted him ‘Capitain’ (because he looked like a fighter pilot). The Earl manipulates Von Prickle, whose misplaced loyalty keeps him in the debt of the Earl of Greynessness.